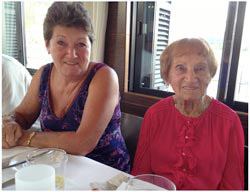 Five years ago, about this time in early December, I wrote about a 99 year old lady who came to our home in Mallorca to meet me and my wife Anne. She had heard about our success with reversing macular degeneration and wanted a second opinion. Ethel was her name and to be clear, Anne and I were in awe of her strong voice.

Ethel lived alone in her apartment and was strong of mind and body (she swam in the sea every day) but the doctors had told her there was nothing that could be done at her age especially as the macular degeneration was the rare ‘wet kind’, and her eyesight was fast disappearing. She had booked to take a long flight between Christmas and New Year for a holiday in just four weeks.

Through a mutual friend she had heard that we had a plan that reversed macular degeneration. Ethel, even at 99 was prepared to try something new (as opposed to the medical doctor’s opinions) but she wanted to question us as to whether there was any chance of recovery.

Luckily, we had at our home all of the supplements she needed, (yes we do take most things ourselves) and Anne gave Ethel tuition (and her daughter) on the use of our HealthPoint (an electro-acupressure device that can be safely used around the eyes) and off she went with strict instructions on her diet. We did give a warning that although it was possible to get her eyesight improved in 4 weeks, every detail of the plan had to be adhered to and especially the diet and nutrients.

Ethel’s confidence in our plan was rewarded when just four weeks later her eyesight improved in one eye to the point that she went on her holiday on her own.

In the following April, Anne and I had the honour of an invitation to Ethel’s 100th birthday celebration where she sprang to her feet and delivered a long clear speech of thanks to the many friends who had gathered there.

Sitting opposite her at the top table we were impressed with Ethel’s ability to deliver a long straight talk, and time her punchlines to get good laughs.

It was so busy at her birthday and I was watching her hold three conversations at the same time. My wife Anne will tell you I can hardly hold one conversation for too long before my mind wonders! Ethel is a role model for us all.

Take Good Care of Yourself

Ethel had a bad fall stepping down from a high pavement carrying two heavy bags where she smashed her face very badly. Although she physically recovered Ethel lost her confidence and her independence. Eventually I believe she lost her strong will to live and passed.

The point of this story is simply that we have to take good care of ourselves all of our lives, including: Keeping physically fit and strong with daily exercise and muscle building, eating a healthy diet (not a balanced diet), taking the missing nutrients daily, drinking six glasses of pure water per day, and keeping interested in life and helping others (only if they ask for your help).

Are you scared that as you get older, you’ll start to lose your eyesight? It may happen sooner than you think. When I first met Ethel she told me her eye doctor had said it was caused by ageing but I disagreed.

99% of all eye disease is caused by poor nutrition and while it used to only show up in older people it is now showing up in 21 year-old youngsters as general diet becomes worse. Of course, the medical system gets around this by calling it a different name – they hate to ever admit that any health conditions can be caused by our diet.

How can you tell if have a problem? What are the early signs? You need to look out for the following symptoms:

The biggest fear for most people is losing their driving license; or even worse their independence.

Help Is at Hand

If you are worried that this could happen to you then you can stop. I’ve got some fantastic news for you that’s going to put your mind at rest and help you restore or keep your healthy vision…even into your 70’s and 80’s (and 99 in the case of Ethel).

I have been helping people since 1996 when eye doctors in the USA started using my HealthPoint microcurrent stimulator and other nutrients to reverse these conditions. Since then and mainly since 2000 when I introduced MaxiFocus sublingual lutein/zeaxanthin spray, I have helped many thousands worldwide to recover their eyesight.

And because of that and new discoveries, I know that all of these vision problems can be stopped before they even start!

While this is great news, it doesn’t mean you can just do nothing and expect your vision to remain the same. First you have to eat healthily and then maybe supplement.

I’ve got more help for you in my free eBook and for those who really like to read more, my full book, ‘Turning A Blind Eye’ is available with recovery plans for just about every eye condition including Cataracts and even Retinitis Pigmentosa (a supposedly incurable genetic condition).

My basic eyesight recovery plan can help most people to prevent or recover from various eyesight problems but we can always provide support if you need more specific help. For those who want to know the science they can purchase my ‘Turning A Blind Eye’ book.

This Basic Plan will help 90% of those suffering eyesight loss such as Macular Degeneration.

All diseases are caused by incorrect foods, lack of nutrients and not walking enough. Start today to correct these and move towards Good Health.