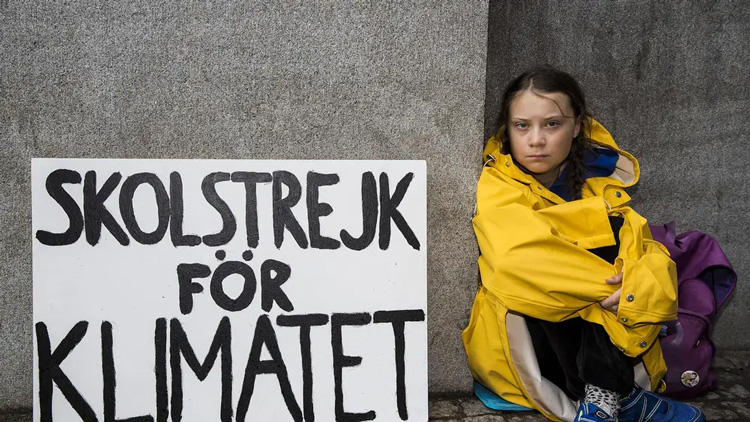 You may have heard of a 16-year-old Swedish schoolgirl Greta Thunberg? She has addressed most governments in Europe and maybe many around the world. She has also called millions of school children around the world to protest by going on a school strike every Friday to force governments to act to prevent climate change.

She started by sitting outside the Swedish Parliament for two weeks to protest inaction by her government to change from using carbon fuels – which she blames for climate change. The publicity from this and her idea to call school children out on a Friday strike has propelled her to international fame. Her talks and twitters have all the hallmarks of either a publicity machine or she has been smitten by the publicity machine of the climate change lobby and therefore with Greta Thunberg.

I disagree with the Climate Change lobby that the use of carbon is causing the desertification and mass die-off of wildlife around the world (and also threatening humans). Of course, I am against pollution by the use of carbon that is contributing to many diseases, and especially lung diseases. I am against strip-mining of coal and ripping down forest and pollution of seas to get carbon.

Even carbon pollution is only a contribution to health problems as I have observed many times that lung diseases disappear when grains, cereals, sugar and processed foods are stopped and replaced with healthy nutrition. If pollution was the single cause then healthy nutrition would not solve it, but it does.

The Prime Cause of Climate Change

You may have read that changes in the tilt of the earth, sun flare cycles and even the effect of other planets in our solar system affect our climate, and yes, they may be a factor. I have looked at many scientific journals and research from serious universities and the conclusion is that the prime causes are the decimation of trees by herbivores and humans.

Trees provide oxygen and are essential for creating a stable environment for rain and of course a huge diversity of insects and animals. I don’t think there is a scientist on the planet that will disagree with me in private. High CO2 is perfect for trees to thrive.

The first major die-off of all large animals (dinosaurs) is well known and that led to the complete eradication of anything bigger than a small chicken.

You may read that the trees and large animals were destroyed by an asteroid strike that threw off a cloud of dust and may have caused volcanoes to also erupt. This, of course, is a guess by scientists and could be completely wrong. Let’s say it was correct. Then why would so many small animals and insects not get completely wiped out?

I am not saying it did not happen but if it did, then it was not the cause but the final straw. Trees have always been destroyed by lightning strikes and should recover unless herbivores get in the way. The greatest cause was the decimation of trees by dinosaurs.

Most of the dinosaurs were herbivores. Not only that, they were gigantic herbivores the size of large houses. They had no serious predators. The T-Rex was puny compared to them, and they had no fear from them.

They could eat grass and most trees with ease. They were big enough to knock down trees that managed to get bigger than them and since they had no predators, they bred until they covered every part of the planet, moving to different areas until everything was devastated.

The Earth was left with almost no trees, no grass, low oxygen and high CO2.

Soon they all died off and if there was an asteroid strike, it was the final straw.

Can you imagine what Africa would look like if there were no humans, no big cats, no dogs? Elephants would breed out of control, rule and became the dinosaurs of Africa. Wild cattle would also breed out of control and as elephants knocked all of the trees down and the grass grew, they would devastate the grass.

Serious farming started around 10,000 years ago around the planet. If you are my age, then you would have learned in school that humans were very sparse on the planet and lived mostly in caves in the not too distant past. The truth is there were huge civilisations around the planet. Their farming has resulted in 3 trillion trees being cut down over this period. It has caused huge environmental changes, wiped out civilisations, and is approaching the devastating climate change that wiped out the dinosaurs. Frogs which are susceptible to oxygen deficiency are dying all over the planet, and is a warning we ignore at our peril.

Cars, Boat and Planes are only partly to blame. If huge dinosaurs can be wiped out through the lack of oxygen from knocking down trees then are we being naive to think we are different. We have enough technology to grow vegetables, fruits, and seeds. And plenty of nuts and fruit from the 3 trillion trees we need to plant for good health.
There is never a better time than now to plant trees as they thrive with high levels of CO2. This will then produce higher levels of health-giving oxygen and save us, as well as the rest of the animals.

COWS, Sheep, Chickens and Pigs: Are they the most dangerous animals on the planet, or is it Humans?

P.S: They consume 30% of all of the precious fossil fuels. Even if Man was not here to make matters worse by farming them, they would, as they did in the great prairies in the USA, stop trees re-growing after great forest fires and multiply practically unhindered.

HOW CAN YOU HELP ME?

It seems the only way we can spread the information with this censorship is for our existing customers and followers to SHARE GOOD HEALTH.
There are several ways you can do this.

Existing customers – can log into their account on the web site and click on the Sponsorship Program to Share Good Health with your friends and relatives. You get Rewards to help pay for your orders, and they get a first-order discount.

Affiliate System – Lastly, we also have an affiliate system, and many people make a living promoting and Share Good Health around the world. https://goodhealthaffiliates.postaffiliatepro.com/affiliates/

There are Establishment organizations around the world that want you a slave to their drugs and do not want you to know that those who achieve good health can never become sick and feeble. I need you to help in Sharing Good Health.