I saw there were some good studies announced this week that are worth a brief mention, before I get onto Ethel’s news!

On Tuesday, scientists from Albert Einstein College of Medicine in New York said that they had managed to kill lab-grown tuberculosis bacteria with good old Vitamin C – by accident. Even better is that they discovered this whilst researching why TB bacteria has become resistant to theTB drug isoniazid!

William Jacobs, the study’s senior author on how he was in “disbelief” and how they “ended up killing off the culture – something totally unexpected”:

In the tests the bacteria never grew any resistance to the Vitamin C, and Jacobs said, (quote) it is ‘almost like the dream drug’.

Of course he had to stress that the test was only in a test tube and that he ‘doesn’t know if it will work on humans’. Nothing to do with the fact it costs as much as a quarter of a million dollars to treat per head (in USA) with 2 years of treatment that cause side effects and no guarantee of a cure!

Even by accepting all of the above it is probably a step too far to expect them to accept that Vitamin C can help fight disease like TB!

I recently added it to my Daily Immune Protection formula (D.I.P), you can Shop Here for D.I.P or if you want Vitamin C on its own, the best one is Plant Cell Vitamin C which provides 600mg per serving. Shop Here for Vitamin C

B Vitamins can slow the Alzheimer’s related shrinkage of the Brain:

Medical Research from the University of Oxford has shown high doses of B vitamins (particularly B12) may slow down the shrinkage of the specific parts of the brain that are vulnerable to Alzheimer’s disease. Quite simply, Homocysteine, which is associated with an increased risk of cognitive impairment and of Alzheimer’s disease, is lowered by taking B Vitamins.

Professor David Smith who led the study said
“our work shows that a key part of the disease process that leads to Alzheimer’s disease….might be modified by a safe and simple intervention”.

Professor Hugh Perry, chairman of the Neurosciences and Mental Health board
“we already know that low levels of B vitamins are associated with cognitive impairment. This study adds to that knowledge and shows that high doses of these vitamins – particularly B12- can lower homocysteine levels and lower the rate of atrophy of those specific parts

of the brain related to Alzheimer’s”.

This is one of the largest studies on B vitamins with 156 participants, so quite conclusive for me! Not sure if you remember but only a few weeks ago I wrote about one of my latest formulas, B4Health Spray, a mouth spray with high levels of B vitamins, including B12? If you missed it Read It Here or Shop Here for B4Health

The media has been filled with news that iodine deficiency is a problem in developed countries. I won’t go into further detail because you may have read this from one of my earlier newsletters, available here. 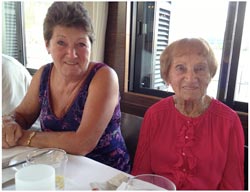 I first mentioned Ethel in my Dec 6th newsletter. After just a couple of weeks on my macular degeneration plan, including MaxiFocus, Serranol and HealthPoint, Ethel improved her eyesight in one eye, this gave her a good feeling that her full independence was returning.

So, shortly after that newsletter, Ethel flew to the Canary Isles (off the coast of Africa) for a Christmas holiday ‘on her own’! To be fair Ethel has always been a very independent lady and I have to say braver and bolder than most of the people I know half her age.

Recently she invited Anne and I to her 100th Birthday party, in Mallorca, on May 18th. 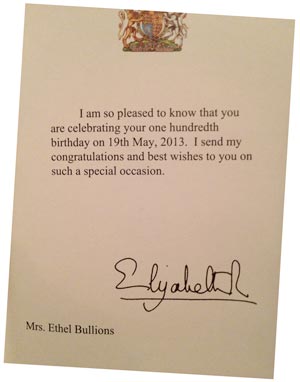 On her way here, we heard from her daughter Liz, that Ethel had fallen flat on her face at the airport in the UK, with two bags in her hands. She smashed her face into the concrete and had to be immediately treated in hospital. Yet only two days later Ethel was on another plane to make sure she was at her own party.

To be clear Anne and I were not sure what we were going to see when we got to the party. Imagine our surprise to see her looking great. You can see for yourself!

The photograph is of Ethel with her daughter Liz . Liz tells me she has to run to keep up with her mum. In spite of everything, Ethel has been still going for her daily swim in the sea, just days after the bad fall. It is a good job she is still taking Serranol, which I am sure has helped her quick healing and recovery.

I have included the video below as I am so impressed with Ethel’s ability to deliver a straight talk, and time her punch-lines to get good laughs.

It was so busy at her birthday and I was watching her hold three conversations at the same time. My wife Anne will tell you I can hardly hold one conversation for too long! Ethel is a role model for us all.

There is a little bad news in this whole story. I told you that Ethel had great results recovering her eyesight in one eye, which was her left eye. However, this happened to be the side of the face that crashed against the concrete and she has somehow lost what she had gained. She has not stopped the eyesight plan and is optimistic for another recovery. 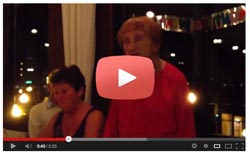 I have suggested she doubles her Serranol to 6 caps per day and increases the MaxiFocus to 5 sprays x 3 times per day. She is diligent with the HealthPoint so there is every good reason to suppose she will get back to her recovered state of eyesight and health. I look forward to my invite to her 101st birthday!

PS If you wonder why I keep trying to give you hope with your condition because there is always hope while there is life. Ask Ethel.