The hot weather is slowly arriving here in Mallorca and so are the bugs. They really don’t bother us humans too much but they do bother the animals. At the moment, Rafa, our dog (named after Rafa Nadal), is invaded by blood sucking ticks every time he goes out, mooching in the long grass. 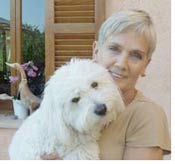 We catch most of them and then remove them with ‘tick tweezers’. However, a few get a good bite and he then gets a nasty reaction with lots of bumps and swellings, where the bites are infected.

It’s a good job we have plenty of supplies of HydroSilver Gel and SerraPet to help get the swellings down. Of course, as I’m sure you all know, there are problems getting animals to take things. The problem with the HydroSilver Gel is he likes the taste and can lick it off, if it is in places that he can reach. That’s OK because at least he is getting it inside him but because most of the ticks seem to be on his face, he can’t get to it.

SerraPet is another matter. You may have seen this video of Anne giving SerraPet to a very willing Rafa last year. How times have changed, he is a year older and like some dogs he has suddenly decided that he no longer likes them. Anne tries various tactics but he just outsmarts her with every attempt. I do get feedback that other dogs are fine with SerraPet so I guess it’s pot luck! Now Anne just opens his mouth, puts it down his throat & then gives him a treat.

Nobody messes with Anne! Not for too long… but then there is Eric……

Eric our cat. He is 12, has had his fair share of accidents over the years and is getting a little creaky. Last week he started to limp and the vet guessed (after his X-Ray didn’t show anything) that it could be his achilles tendon.

Getting SerraPet down a cat is more of a challenge than getting it down a dog. When Eric decides to take his SerraPet, mixed with a treat, the limping eases and when he doesn’t it comes back. Anne does put an occasional tablet down Eric’s throat but she does not like doing it twice per day (everyday) as it upsets him. All suggestions will be gratefully received!

Finally our daughter’s dog is a little 5 year old Jack Russell called Teddy, and as well as the tick problem he gets growths occasionally between his paws. When these growths occur they have a secret and get him to take SerraPet and CurcuminX4000 – they smear it with a little tuna / fish oil and he eats them. The good news is that the growths go away.

If only all dogs were as easy as Teddy, taking their natural health medicine! Let’s not forget that he is a Jack Russell!

Whatever your dog, horse, cat or pet suffers from there is probably something that can help.

My main recommendation is SerraPet, this is serrapeptase for animals. It helps with the same things that it does for humans and we know that it helps so much: It can help with problems such as:

I regularly hear good feedback on how SerraPet has helped animals of all types – it is a popular choice for horse, dog and cat owners (as part of overall treatment). This is a good testimonial taken from facebook.com/TheMiracleEnzyme

Other products that are suitable for animals include Hydrosol Silver Gel and Hydrosol Silver Spray, Silver is a good natural anti-bacterial and is good for natural healing, the gel can be applied topically and the spray can be put into their drinking water. As with the example of Teddy, CurcuminX4000 can be used with pets and finally, if your pet has a gastro-intestinal problem, Prescript Assist can be sprinkled onto their food. This is an amazing probiotic and amongst many other studies, has an animal study to show how it can help canine diarrhea.

I personally feel that vets are too involved with the pharmaceutical industry. A more natural and raw diet along with relevant health supplements can serve your pets in a much better way. We use the vet ourselves, mainly to identify if there is a problem and for peace of mind – we then try to work out the solution!

PS Let me know your tips for keeping your pet healthy the natural way!